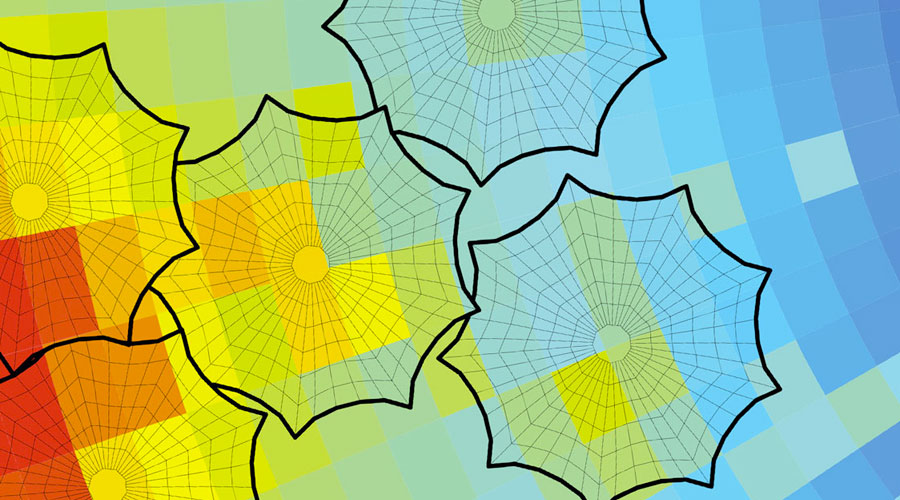 The International Association for Shell and Spatial Structures (IASS) is currently celebrating Frei Otto – recipient of the 2015 Pritzker Architecture Prize – with a Special Issue of the IASS Journal (Vol.59, No.1, March 2018). This publication was edited by Juan Gerardo Oliva (Vice President of the IASS and Professor at the Universidad Nacional Autónoma de México) and Ekkehard Ramm (Torroja Medalist of the IASS and Professor Emeritus at the Universität Stuttgart).

I was invited to contribute to this special issue that includes articles by, among others, Christine Kanstinger (Frei Otto’s daughter), Mic Goldsmith, Pepa Cassinello & José Antonio Torroja, Mike Schlaich and the guest editors.

My contribution, entitled: “Integrating form, structure and acoustics: A computational reinterpretation of Frei Otto’s design method and vision”, is currently available on the IASS website. You can find below the abstract of the article (also present on my ResearchGate profile) and some relevant figures.

In several of Frei Otto’s early membrane structures, acoustics was a rather relevant design aspect that could not be controlled through classical form-finding approaches based on physical models. Moreover, it is possible to add that, geometrically speaking, Frei Otto’s membranes could naturally perform acoustically, because of their anticlastic shape and the ability of the convex areas to scatter sound. In this paper, two of Frei Otto’s key projects are revisited and redesigned parametrically using mathematical optimisation: first, the Dance Pavilion that was conceived for the Federal Garden Exhibition in Cologne (1957); and, second, the large umbrellas that were built at the same venue in 1971. His architectural form of “necessity” represents the structural optimum, that is, a buildable technology, which can now be informed by other performance criteria, such as acoustics.

The work described in this paper could show a possible way of expanding Frei Otto’s two-step design method, which was based on the sequential use of a form-finding model first – to literally “find” structural form – and then a technological model – to study the tectonic aspects of the structure and endow it with materiality.

This paper was inspired by the rock set designs of Mark Fisher and – in particular – by the retractable umbrellas that Frei Otto designed, in 1977, for the second leg of Pink Floyd’s “In the Flesh Tour”, which was also known as the “Animals Tour”. 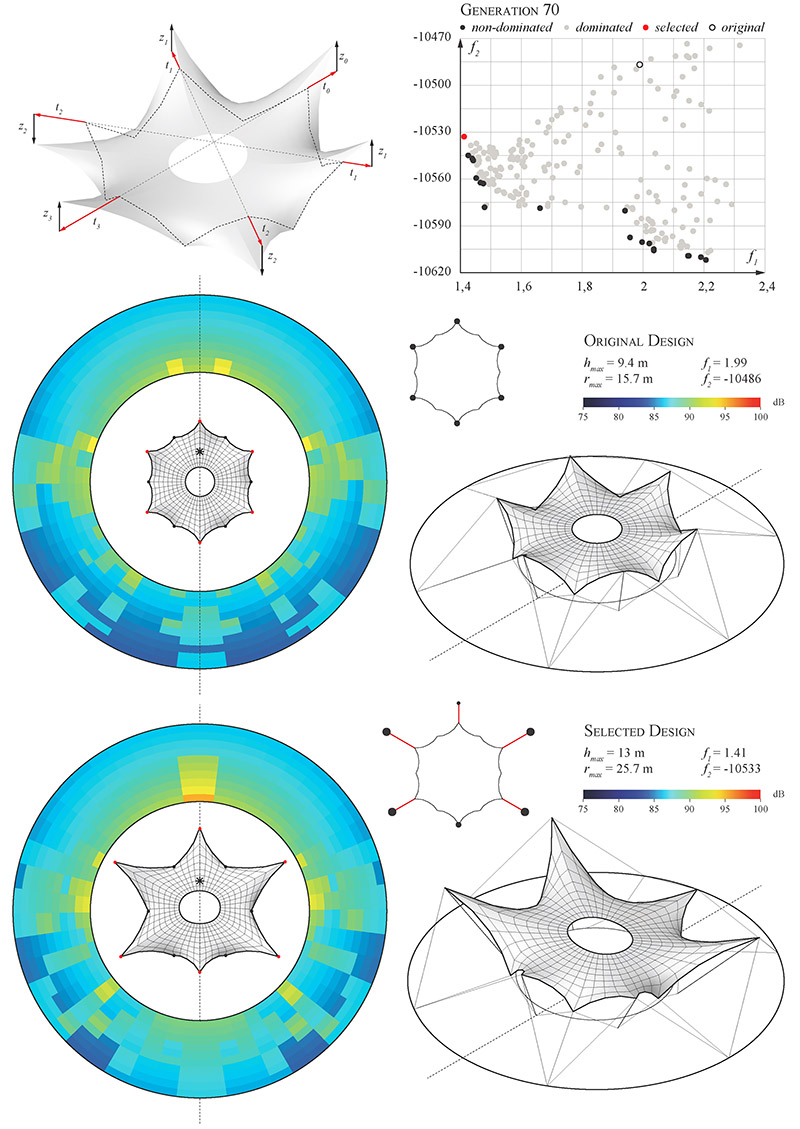 Figure 1: The Dance Pavilion: acoustic scenario no.1, with an omnidirectional sound source. 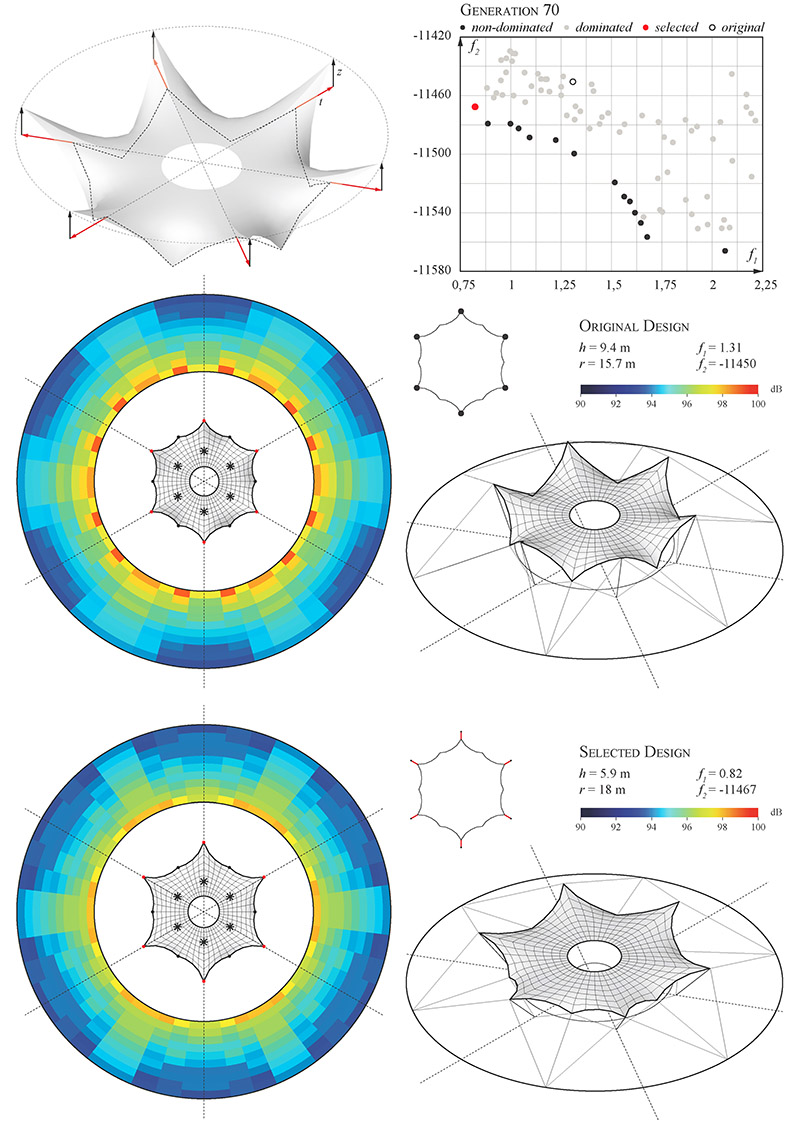 Figure 3: The two fitness landscapes of the second optimisation process of the Dance Pavilion (Figure 2). Six different design proposals, including the original and the selected designs, are also illustrated. 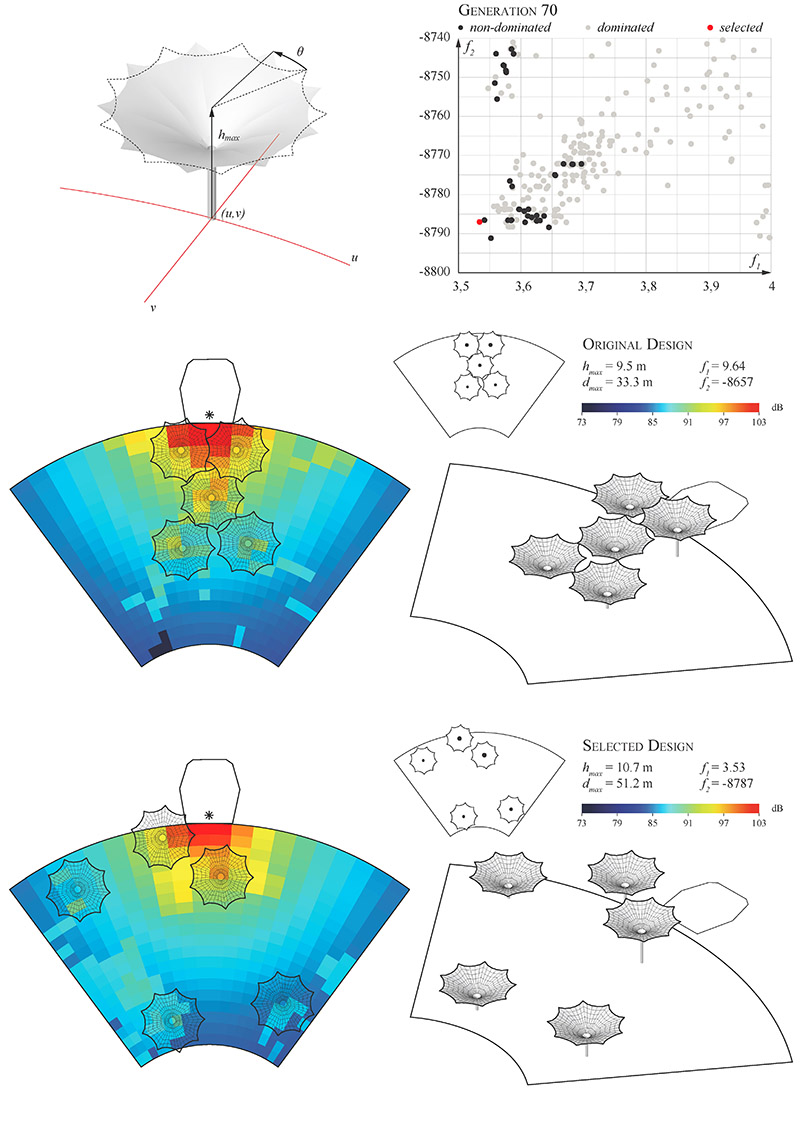 Figure 4: The optimisation results of the large umbrellas in Cologne. The acoustic response of the original design is also illustrated in the middle of the figure.

The author would like to express his gratitude to Gabriele Mirra, whose acoustic solver was used in the optimisation processes described in this paper. Gabriele Mirra’s contribution to the development of the case studies and his view of the optimisation results should also be acknowledged. Giorgio Marfella has also been an incredible source of information. In particular, he kindly provided Pink Floyd’s bibliographical references that helped the author reconstruct the details of their “Animals Tour” – the second leg of their tour in North America.

Thanks to Neil Thomas for his inspiring keynote lecture: “People Who Need People”, which opened the final day of the IASS Symposium 2017 in Hamburg. His was the right lecture at the right moment for the completion of this paper introduction.

The KölnKongress website was a useful resource of photographic material, as well as of detailed CAD drawings of the Federal Garden Exhibition area. In fact, the case studies discussed in this paper were modelled from the information retrieved from this link.