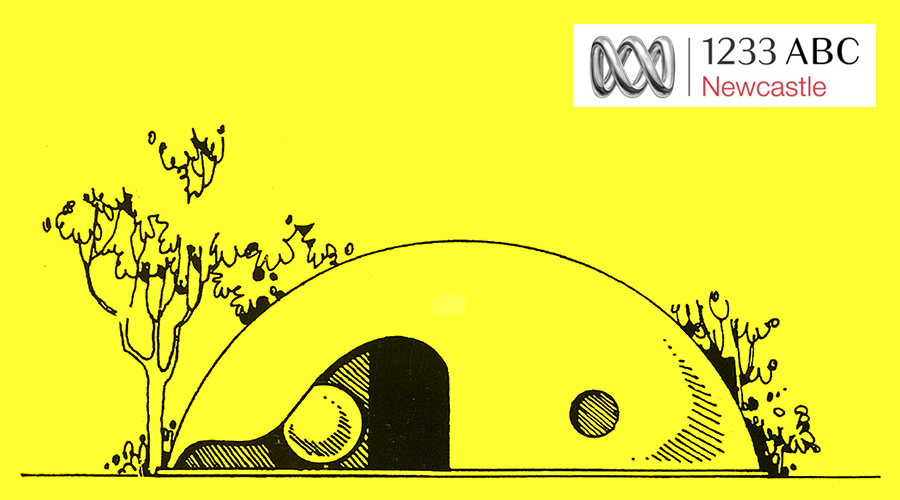 On 31 October 2016, I was interviewed by Rosemarie Milsom on 1233 ABC Newcastle. Here you can listen to the radio interview or read the transcript below.

The moon has fascinated man since time immemorial, many structures have attempted to emulate symmetry. Ancient cultures used domes because of their beauty and their innate strength. However, one of their major drawbacks has been the difficulty of construction and the enormous cost involved. The Binishell system has overcome these problems.

Did your school have a Binishell? You know those white domes that go bad as out of place in a schoolyard as a herd of elephants. One of the schools that I went to had one it was always leaking it was always too hot, too cold. News that the Hunter School of Performing Arts is getting a much needed $9 million upgrade also means its Binishell is being removed. Got us thinking here on Drive: who came up with the plan to build them in the first place? And, do they have any architectural significance? You're gonna hear from a Bini specialist this hour, and I reckon the hunter is becoming a festival hotspot. Maybe you enjoy the drive up to Dungog on the weekend for the town's very successful festival. Or, you could possibly call it a film here, in town in Newcastle with the real FilmFestival. This weekend, it's scones turn and you'll hear more about what the town has planned shortly. How do you feel about Binishells? The hunter is home to three of those unusual dome-shaped structures, which were built on the grounds of local high schools. One was demolished at Sports Height Gatesheadearly this year, and it's been announced this morning that the shell at theHunter School of the Performing Arts at Broadmeadow will also go in the next few years to make way for an upgrade. You might have heard the school's principal Jo Gray on 12 33 talking about her feelings about the Binishell.

Really, it's as ugly outside as it is inside. It's very dysfunctional in terms of you know sound for production. So to be able to replace that with something where the whole school can actually get together and meet is going to be another wonderful change for us.

Yeah, so once the wrecking ball takes it out, there's only going to be one Binishell left. And that's at Callaghan College at Jesmond. I'd love to hear how you feel about the structures. You can give me a call on 1300 33 12 33. Do you have fond memories of the Binishell at your school? What was it like to be in one? Well, whether you love them or hate them, have you ever wondered why they were built in the first place? Dr Alberto Pugnale is an Architect and Senior Lecturer in Architectural Design at The University of Melbourne, and he's written several papers on Binishells and he joins me now. Good afternoon, Alberto.

Good afternoon, thanks for the invitation.

Where did the original design come from?

Well, the original design comes from Italy. Dante Bini, when he was a young architect, he was at the same time a builder and an inventor, so that's a very typical thing of the Italian tradition. So, he was really involved with the idea of reinforced concrete in the Post War tradition that was really typical in Italy, and, at this time, He knew that there were issues in building that stuff, because we always need, you know, expensive formworks and skilled labour. So he decided that - that's what he said - that he was playing tennis, inside an inflatable balloon, he said that he could use the power of air to lift concrete, but pouring the concrete first on the flat surface on the ground. And, then we just started experimenting in a very empirical way. So, he just did it, he realized that after a couple of tries that you could actually make it. He could build a 12-metre dome, and then an 18-metre dome and finally 30-metre and even more. That's what we have got in Australia, we've got a few 18-metre domes, and the larger ones, they are 36-metre domes.

How did they come to be built in Australia?

What happened is that an important American Professor - Mario Salvadori - at Columbia University, found out about Dante Bini and his Binishells in 1967/68, and he decided to invite him, he couldn't believe that, so he decided: I'm going to invite you to Columbia University and demonstrate that for me. So you're going to build a prototype at 1:1 scale for me in America. They did it, it made the New York Times, and then I remember that the Minister for Public Works at that time, promised to build school facilities within an unrealistic timeframe. So, they decided to use the finisher system to be able to build 14 different school facilities within a year and a half or two years, which is between 1974 and 1977, at the end.

What was the benefit? So it was it just it was you said that it was quite quick to put up? Was it also cheap?

Well, to build a Binishell is not cheap, it's actually more expensive than building a conventional school facility.

Oh, gosh, don't tell me that! I've never been a fan of them.

But if you build 15, 20, 35 of them, then you start getting advantages because the advantage is using the prefabrication and in the rapidity of construction, because, try to imagine that they inflate it (the Binishell) in three, four hours. So you wake up in the morning, you go to work, and you'll see the blue sky, when you come back in the evening, you find the space shuttle besides the road. And I think that's fascinating. I mean, at least in that period. You have to project yourself in the late 60s or the 70s, when there was really this idea that we can, you know, live in the future and make a revolution out of everything.

What have been some of the downsides? I remember, I went to a few schools, and one or a couple of them had these Binishells, and are always having trouble with water. You know, like, after a big storm, water tended to get into them, and they're always closed for work and patch up jobs. So there seemed to be a bit of an issue with drainage.

Yes, that's right. I visited most of them in New South Wales, and the main problem was water, but it also had some acoustic issues and light, so tend to be very dark. So, I believe that, that is currently the main concern. But in the 80s, there was also another major concern that was structural, because in 1975, when they built a Binishell at Fairvale High School, over the night, like during the day there were 40 degrees, and over the night, it went down to 15. So that Binishell collapsed a few hours after construction, and it was still a construction site, so nothing happened, but they had to rebuild it. And, you can imagine the concern of people like bringing kids to school in an unstable structure. So another view in the 80s, there were serious issues about the structural stability of these things, but that's the only one which collapsed, together with Pittwater High School, and I'm not aware of any other collapse that happened around the world. So, these are the only two cases.

Alberto, should we be keeping a couple for, you know, are they going to have any historical value down the track? Will it be a shame if they all are removed?

I believe so. That's why I started at the beginning research on Binishells in Australia, because, for instance, in Italy, there are so many that I cannot even count them, and there are probably, I believe more than 100. And, they are all over the country, because they are used for other things, like swimming pools or holiday houses. In Australia, there are only a few, and probably 15 to 20, I'm not sure I can say a precise number, because every day I discover a new one. But they're all going down. And I believe that at least probably the first one that was done in Narrabeen, or maybe a couple of them should probably be preserved as they become an integral part of our heritage. Bear in mind that in Australia, there is not really a tradition of reinforced concrete domes, and apart from the Academy of Sciences in Canberra, they are becoming part of our heritage. And they actually made the fortune of Dante Bini because he was famous in Italy, but that was the first time he emigrated, and then went to the United States. And, so Australia really gave him the possibility to, you know, continue to realise his dreams. So, somehow I think it's an important part of our history, at least in New South Wales.

You're obviously, you've done a lot of work on the Binishell, and you've researched it, research them, and you know a lot. What got you interested?

I'm generally interested in the construction of domes, and spatial structures in general. And at the beginning, I found that there was an Italian architect like me, emigrating to Australia, and being able to, you know, have incredible success. So I decided why don't start researching it. I would also be able to look at archival material, read in Italian, and at the end. I even went to visit him [Bini] at his house, now he's staying in the United States, in the Napa Valley. And at the moment, he is going in another direction, like he’s still using inflatable membranes, but to build normal houses. So they're like folded, the walls are folded, and then with a balloon inside the house, and it's ready to live in, but they don't look like domes. They look like normal houses. And that's fascinating, he is probably more than 80 years old, and still with the idea of automating everything. And I think it's incredibly fascinating the idea that instead of doing things in a conventional way.

You think outside the square. Create a dome!

The world of construction is really the opposite of technology [and innovation]. It has always been a very conventional industry, like compared to, to other ones, you know, communication, transportation. And I think the idea of doing a revolution also in the world of construction is fascinating. We're still far from that. And Dante Bini is one of the persons who have contributed a lot.

Yes, well, Alberto, thank you so much for sharing your knowledge this afternoon. I really appreciate your time. That's Dr Alberto Pugnale, who is an Architect and a Senior Lecturer in Architectural Design at The University of Melbourne. And as I said, he's written several papers on Binishells, and we're gonna lose another one when the Hunter School of the Performing Arts gets some work done the next couple of years. Now, I have Dan on the line from at Georgetown and he loves the Binishell. Good afternoon, Dan. What do you love about them? [...] 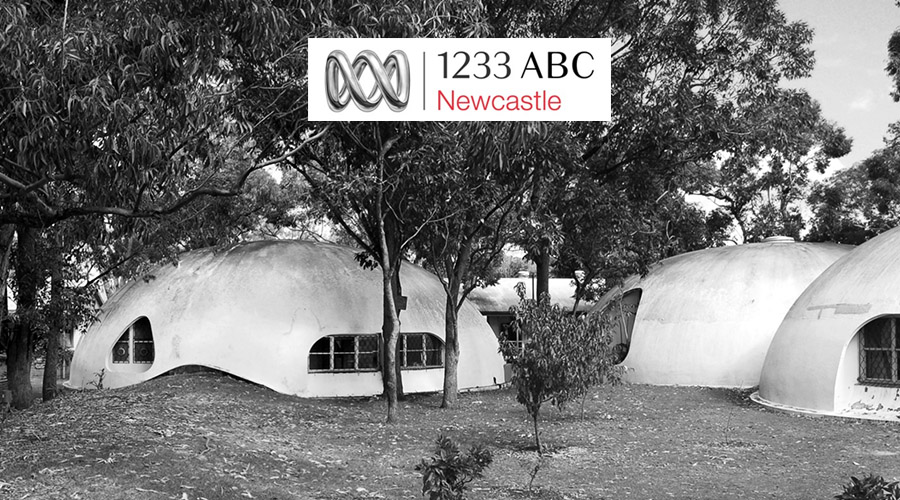