Form-finding of reciprocal structures with GH and Galapagos 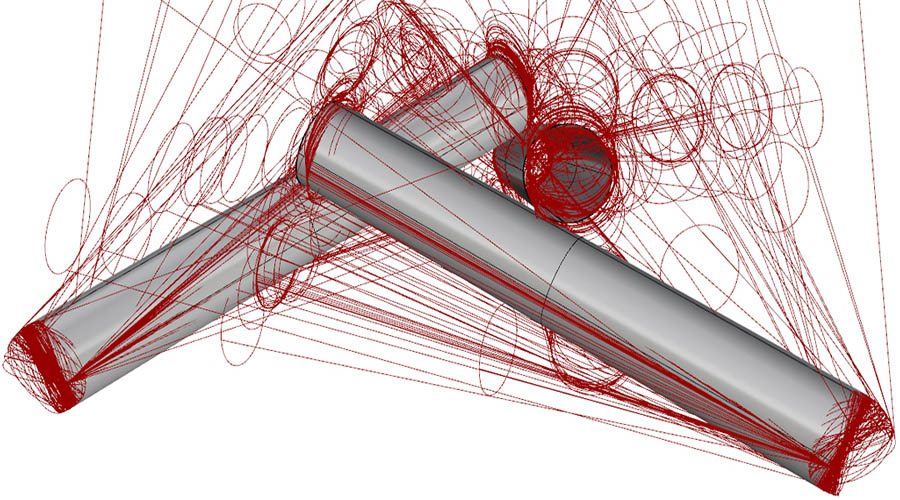 Form-finding of reciprocal structures with GH and Galapagos

Consider three glasses, arranged on a table at the vertices of a hypothetical equilateral triangle, and then imagine covering that area using just three kitchen knives. Assuming that the glasses are the only supports, the knife handles should first be placed over the glass openings, and the blades should be made to overlap one another, like a fan. The resulting configuration is the simplest reciprocal structure made of three elements. 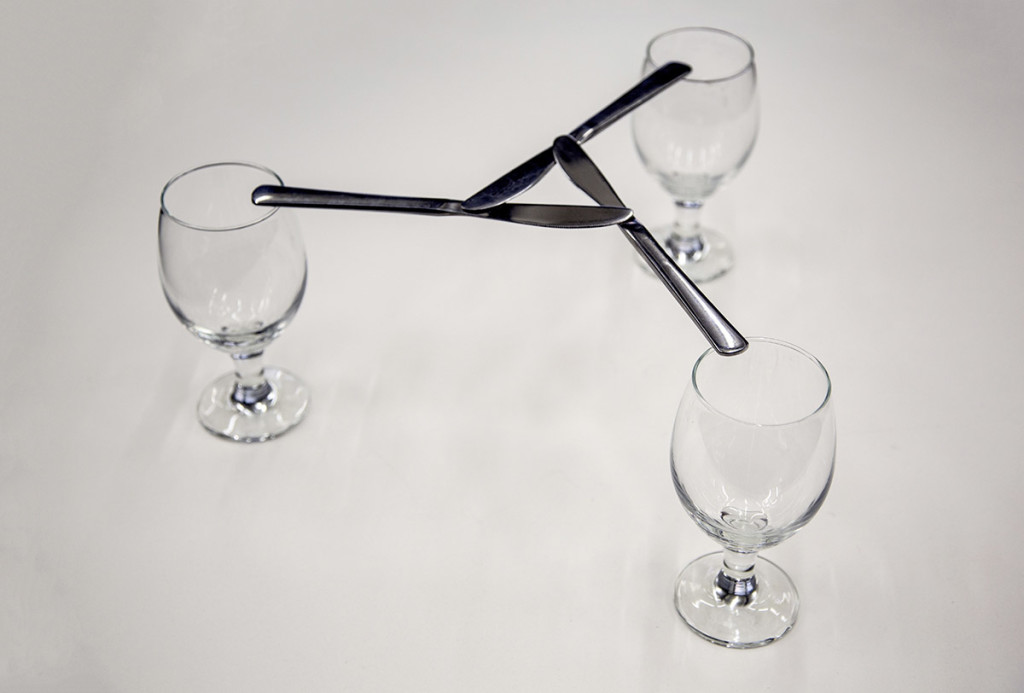 Technically speaking, we could say that “a reciprocal structure is based on the use of load bearing elements which, supporting one another along their span and never at the extremities, compose a spatial configuration without any clear structural hierarchy” (Pugnale et al. 2011, Pugnale and Sassone 2014).

Now, let us imagine that the three knives are natural timber beams. They compose a slab of elements, none of which is long enough to span the opening, with no need for intermediate supports. Furthermore, they ensure a rapid and reversible assembly due to the simple and cost-effective joints. They construct, in fact, a functional structure in which timber, at least in the Western culture, has always been preferred instead of masonry as construction material.

From the geometrical point of view, a reciprocal configuration is defined by:

With these parameters, it is possible to describe and automatically generate any basic configuration, as well as more complex ones, assembling single fans together (Baverel and Pugnale 2012; 2013).

Let us consider just the simplest reciprocal configuration made with three elongated elements (figures above). Variations of the engagement length and eccentricity can already produce a certain amount of diversity, as well as increasing the intrinsic three-dimensionality of the composition.

From the form-finding point of view, a simple configuration made of three elements is already a good benchmark for an optimization algorithm. Then, what a better occasion to verify how Galapagos works?

The boundary conditions of the problem are the three support points of the reciprocal bars (which are fixed at the vertices of an equilateral triangle) and the values of engagement length and eccentricity (they are equal for the three bars).

The three design variables are the X,Y and Z coordinates of the three bar ends (just out of curiosity, try to move them yourself and find the optimal solution without using the optimization tool, it’s almost impossible!).

The fitness function is defined through a vectorial calculation of respective distances between elements. When such a distance becomes zero, the bars will reciprocally lie on one another.

The sliders are already set up on the optimal solution (one of the two possibilities because the fan can be either oriented clockwise or counter clockwise).

Now try to vary the two parameters related to the engagement length and eccentricity to start over with the optimization. You can also just change values to the sliders. 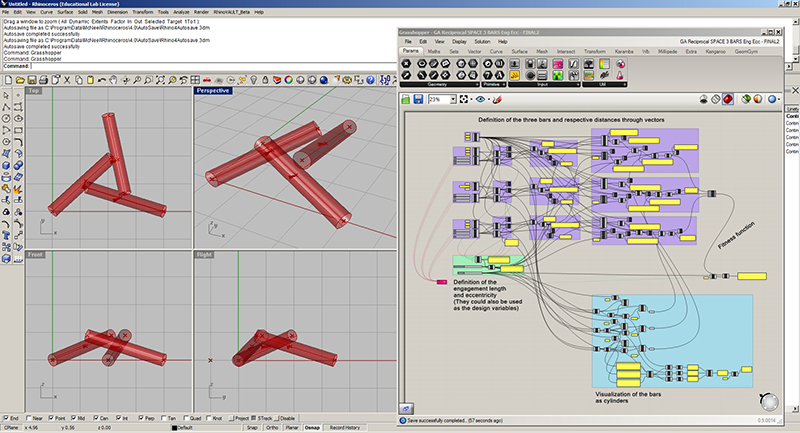 Galapagos does not seem to work optimally even if the problem is quite simple. It either converges too fast or does not converge at all (it finds a suitable solution but then it does not reach the optimum). In order to find the optimal solution I had to run it more than once for around 3000 generations. I used a population of 50 individuals and a low value for inbreeding (in order to avoid a too fast convergence).

Such a form-finding technique has been developed by Olivier Baverel and read from this article: BAVEREL O., NOOSHIN H., KUROIWA Y., Configuration processing of nexorades using genetic algorithms, in “Journal of the International Association for Shell and Spatial Structures”, vol. 45, no. 142, 2004, pp. 99-108.

Feel free to reuse it for the form-finding of more complex configurations.

Other form-finding and computational techniques of morphogenesis have been developed, for instance, by Udo Thönnissen at ETH in Zurich, and Dario Parigi at Politecnico di Torino and Aalborg University. I highly recommend their articles. Some of their latest research developments are published in “Nexus Network Journal”, Vol.16, No.1, 2014, of which I am guest editor.